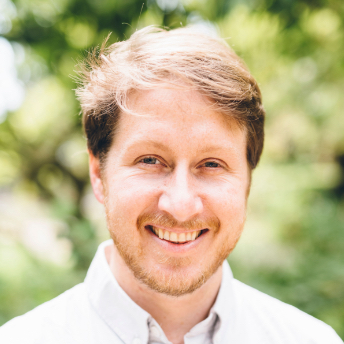 An unusual snow storm snarled traffic in Seattle and shut down airports and public transit but it was still a packed house at our second Open Design Jam in Seattle. This is an ongoing collaboration between Ushahidi, Adobe XD, and Designit. This Design Jam was a cross between human centered design, rapid prototyping, open source software development, and a hackathon. In a Design Jam, we take the rapid prototyping and empathy-building components of great product design and apply some of the collaborative tenets of open source software development to create a day long workshop of problem framing, ideation, and prototyping. The Jam as a creative format aimed in getting creative input and new ideas to improve TenFour. Like our first event in Berlin this focused on local conditions and got two teams of creative minds to collectively craft features to help people in Seattle in crises situations. We hosted this workshop as part of  IxDA’s annual Interaction Week , in Seattle. A group of passionate designers with diverse backgrounds joined us for the day-long workshop. The session kicked off with  a quick overview of TenFour, Ushaidi’s product that helps organizations of any type answer the critical question “Who needs help?” during a crisis. We told the story of how we used TenFour ourselves to account for our Kenya-based team members during the Riverside attacks in Nairobi a few weeks ago to demonstrate how the product works and it’s current functionality.

A Design Jam is all about connecting the real world to designs and pushing the envelope of how we think about a product. To keep it local, we then walked through three imaginary scenarios specific to Seattle. In one, we imagined the impacts of intense rain and flooding in Seattle (a common occurrence). In another, we talked through how to account for everyone in a class on a school trip to Oso. The third involved a wastewater treatment plant being flooded, and getting the word out to workers about the crisis.

From Scenarios to Prototypes, Fast, With AdobeXD

That was the hard part. Then came the fun - building wireframes. After lunch teams got started in Adobe XD designing what this storyboard and features looked like. By 4pm they had to be ready to give a demo of the user journey complete with clickable prototypes.

The first team built upon the scenario of a school trip in Oso that gets hit with intense rain and flash flooding. (This in fact happened back in 2014, and Seattle’s white-labelled version of the Ushahidi crisis mapping tool, FirstToSee, was used heavily in the response). In this scenario a few of the students had gone missing. So the team integrated functionality that allowed the teacher to set safe rendezvous points and emergency contacts ahead of time. In their scenario the Oso school trip team messaged all the emergency contacts for each student and the school, and launched a search party. In a nifty twist, he they designed a new features that would allow the app installed on a phone to work like a beacon when backcountry skiing. When the search party put their TenFour apps into search mode, and an AR-type functionality would pop up that provided directions towards the phones of the missing kids. The phones of the search party would beep and vibrate as they got closer to the phone of the missing kid.. Once one search party found the kids, a message was sent out for everyone to go to the preset rendezvous point, and the app gave turn-by -turn directions for everyone to get there. Very cool!

The second team focused on the flooding of wastewater treatment plant facility. In this scenario, hundreds of workers were trying to exita large industrial facility. The team identified that some parts of the plant could be hazardous, while others parts might provide a safe route out. So the team created functionality that allowed for crowdsourcing of real-time info from everyone in the org to drop pins on a map about what was safe and what was hazardous. In a crisis, everyone would check the map to find the real-time information and identify the safest ways to escape. This iteration basically combined the Ushahidi mapping platform and the TenFour emergency response application. We were impressed. That a third-party came up with this use case and functionality all it validated some of our vision around these two products. This made us happy.

Design Jams are contests but we hate to think one solution was better than the other. Not surprisingly, the judges had a hard time choosing the winner.  Both teams built very realistic, and very applicable functionality. They built on real-life scenarios, which led to functionality that has been requested by current real users of the platform. Kudos! Ultimately the judges chose Team 1, the team that built from the scenario of the Oso School Trip. The reasoning was that the team built an excellent set of functionality from start to finish for identifying and then finding someone who is missing. But as far as we were concerned, everyone clearly won who participated.

The impact of the Design Jam will live on well after the snow melted in Seattle that week.  Ushahidi will turn designs and user stories into github issues and eventually code some or all of the suggested functionality into the TenFour application. We’ve found this process of opening up our design process to bring in other brilliant minds has been a fantastic way to generate new ideas, get real user feedback, and have a ton of fun! All to build tools that keep people safe and save lives in critical situations. We wanted to thank Designit and Adobe for collaborating in this and we can’t wait for the next one.